Note: this is an article that is updated annually as we try new hosts and companies (and therefore our recommendations) change. Last updated January 2019.

If you are looking to find info and recommendations for the best WordPress hosting for businesses in 2017, you’ve come to the right place. In this post we compare five common hosts across reliability, cost, support, and ease of use. We’ll compare (each link below leads to its own section in this article):

At Credo we’ve used the top four listed above, and feel it is necessary to also compare HostGator and SiteGround as they are two that are constantly recommended as well.

At the end of the day, you get what you pay for in life. This absolutely applies to website and WordPress hosting as well. So while price is a consideration, keep in mind that the different between $4 a month and $30 a month is only $16, which you probably spend on coffee each week. In the grand scheme of things, $16 is a tiny amount to pay for the right solution.

Credo is built on WordPress. I (John) have been developing websites and businesses on WordPress for six years now, with previous experience on Joomla.

If you are familiar with WordPress then you probably know that it has two versions:

In this post we will talk about WordPress.org only. WordPress.com is most often used by amateur bloggers who do not pay for a real domain name. These bloggers will then “upgrade” to WordPress.org until their site becomes popular enough (we’re talking millions of visitors per month) to merit another change to something like WordPress VIP (which powers sites like TechCrunch, The New York Post, and Quartz).

If you use WordPress.org, then you are responsible for finding hosting, keeping your install up to date (some hosts will do this for you automatically), updating plugins, testing for plugin conflicts, and more. It’s more work to be sure, but if you’re running a business or larger website then it ends up being cheaper than paying per-upgrade like on WordPress.com. And, there’s no monthly fee like SquareSpace.

Kinsta is a relative newcomer to the managed WordPress hosting space, founded in 2013. Based out of Budapest with offices in LA and London, they focus on rock solid technology and great support.

We moved to Kinsta from WPengine at the beginning of 2019 to take advantage of Kinsta’s technology that enables WordPress sites to run very quickly and at a reasonable price. Their support team is fantastic and always willing to help out quickly, leveraging their multiple timezones to provide support.

Kinsta’s pricing is competitive for companies and sites with solid traffic who make their revenue through their website. Their prices start at $30/mo for one install with up to 20,000 visitors per month and then go up from there.

In short, we love Kinsta here at Credo.

WP Engine is based out of Austin, Texas and pride themselves on being a premium managed WordPress hosting provider. This means that you won’t get hosting from them for $3.92 a month, but you can rest easy at night knowing that your site won’t go down or slow down because of someone else’s site on the same server.

WP Engine costs more than their competitors to start, though with it you receive:

One of the downsides of WPengine is the cost. While it starts at $29/mo, if you want to have more than one install then you immediately go up to their next pricing tier of $99, which starts to become pretty expensive. On the other hand, if you’re running 10 installs with a total of under 100,000 visits per month, it’s only $10 an install.

Credo moved from another host to WP Engine in February of 2016, and I never regretted it though we did move to Kinsta in January 2019.

Also, yes we are WP Engine affiliates and that is an affiliate link. We only are willing to be affiliates for hosts we know and trust.

You probably see Bluehost mentioned on all the popular marketing sites you read. Why? Because Bluehost has an aggressive affiliate program and is great at signing up new customers.

When you sign up for hosting with Bluehost, at the bottom level your website is included on servers with many other websites. This server is also not specifically configured for optimal WordPress hosting.

On the plan that starts at $19.99/mo (which goes up to $39.99/mo after the introductory period, by the way), it seems you are put on servers optimized for WordPress websites, which is definitely a step above the very low advertised $2.95. It is also more expensive than WP Engine at the bottom level, so take that into account.

Bluehost allows “unmetered” traffic (they have some cheeky hundreds of millions numbers specified) meaning you won’t pay for traffic overages (unlike WP Engine), but this does also mean that if your site is on the same server as another site that all of a sudden receives a huge spike of traffic then your site will run slower.

I haven’t had any sites hosted on Bluehost for a couple of years now, and I moved away from it specifically because every July my sites would go down while I was on vacation. I do not know if their reliability has improved, but I was glad to move off of them and onto Dreamhost, which is where my sites were hosted until moving to WP Engine.

DreamHost is another option in the lower-budget hosting world, offering both general website as well as WordPress hosting just like Bluehost.

DreamHost also now has dedicated WordPress hosting starting at $7.95/month for shared hosting and $19.95/mo ($16.95 if you pay for a year upfront) for “DreamPress”, which is their fully managed service (like WP Engine) that they claim:

As far as I can tell, DreamHost doesn’t offer anything that the others already reviewed offer, and the pricing is right about the same. We should note that they don’t do the sneaky pricing of BlueHost though, so I’m pretty sure your pricing will stay consistent ($19.95/mo or $203.40 paid up front for the year).

On a personal note, I used DreamHost for about two years directly prior to moving to WP Engine. While I can say that I enjoyed their admin area a lot more than Bluehost, their site speed was still pretty abysmal and their support was non-existent. It was cheap, but not worth it for a business site in the end.

Another popular site I see people recommend for hosting is HostGator. 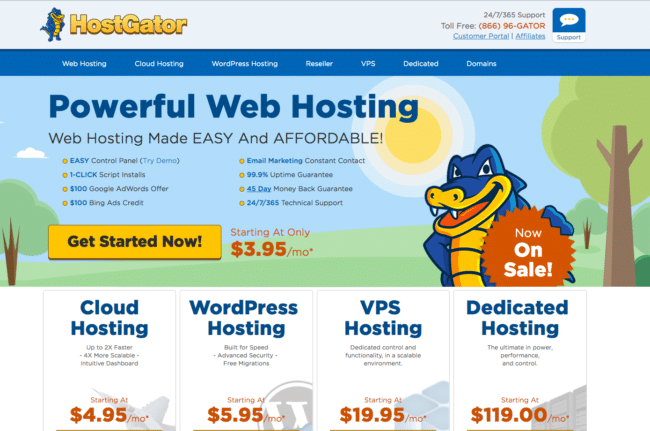 I cannot personally attest to their reliability as I have not used them personally, so let’s look at the numbers.

HostGator advertises their WordPress hosting starting at $5.95 a month, which is actually $9.95 a month before they apply the discount. It also seems you are required to pay up front for three years to get this rate, which is $214 out of pocket right from the start.

HostGator does give you nightly backups included (with limits on size depending on level) and $100 in Google AdWords credit, which is a nice little bonus.

At the end of the day, it’s unclear what you’re getting over the others other than a slightly cheaper monthly price.

The final WordPress host that is often recommended to me is SiteGround. 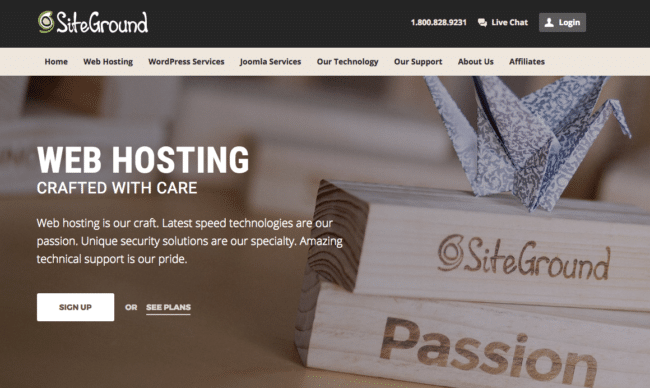 Just like HostGator, I do not have personal experience on SiteGround. Compared to the other hosts we’ve talked about here, their offering is fairly similar:

SiteGround doesn’t seem to offer anything special and they do the same tricks as most of the others with a lower introductory offer that goes up from there, and their plans offer different levels of traffic, storage, and features such as backups depending on what you pay.

Hosting is so hard to get right, especially if you are not a technical person. As you can tell as you read through this post, I’ve used many different hosts and each has their plusses and minuses. If you want to do deeper research, there’s a detailed guide on the best web hosting here.

Ultimately, I recommend WP Engine if you’re running a business website on WordPress. The cost is a matter of dollars per month, but I have never had to worry about my sites going down on WP Engine or not being able to recover them.

Get 20% off WPengine plans

Google Ads vs Facebook Ads – the Differences and Similarities

Posted by John Doherty on June 17, 2021 in Marketing Strategies/Product Comparisons

So, you’re about to launch a marketing campaign, and the time has come. It’s time to choose between Google Ads and Facebook Ads. You want…

CPC vs CPM vs CPL – What’s the difference?

Posted by John Doherty on June 14, 2021 in Growth/Marketing Strategies

Posted by John Doherty on June 10, 2021 in Marketing Strategies

Hi, John here. After you read this post I highly recommend that you read my diatribe on doing better backlink outreach. In many ways, links…