I’ve been in SEO for a long time and seen a lot over the years. Panda rolled out about a year into my career, then Penguin, then all the other amazing algorithm changes we’ve learned to roll with over the years. As Marshall Simmonds of Define Media Group says, “That right there is job security”.

I’ve also seen Google slap down different tactics that seem to be gaming their algorithm unfairly. We’ve seen them allow and then drop emojis, remove and add stars to results, and so much more.

Today I noticed something interesting happening that I haven’t seen in a while – a site getting star results off the back of another site’s reviews.

Before I go any further, allow me to say two things. First, I have no vested interest in either of the companies I am talking about here. I simply noticed something happening. I also am not saying that MapQuest is doing anything wrong here. Google is notoriously terrible at figuring out the original owner of content.

Today I was searching for some local results as I was helping a local business with their SEO. I noticed that MapQuest is getting star results showing in the search results even though they are simply displaying Yelp review counts.

When you do a search for [vinyl coffee san francisco], you get this:

Nothing out of the ordinary.

But then you scroll further down on the page and find MapQuest:

They have stars as well, with an aggregate rating of 6.6/10 being displayed, and 234 reviews.

But when you go to their site, you see that they’re bringing in reviews from Yelp (though apparently not in realtime, as Yelp has 238 reviews for them at the time of this writing while MapQuest has 234): 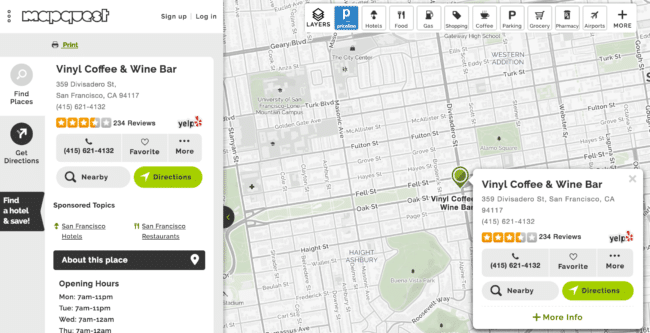 If you look at the code, Yelp is using Schema.org and using the aggregateRating amount, whereas MapQuest is not using any sort of valid markup, though they do have a DIV called “aggregate-rating” and a value of 6.6 assigned.

Based off looking at the two code snippets above, I do not believe that MapQuest is doing anything wrong. They don’t have the ratings inside of valid Schema, but Google is choosing to show the stars anyway. So good for them while it lasts!

B2B SaaS has grown in popularity steadily since the early 2000s, and with it industries have become competitive and therefore SEO rankings in Google’s search…

Posted by John Doherty on May 3, 2021 in Marketing Strategies

Selling on Amazon has never been easier. It’s also never been as competitive as it is now. That’s why it’s so important to optimize your…

This post is for you marketing leaders and entrepreneurs out there. Today we’re going to talk about what growth marketing is and if your business…