It’s time to approach SEO as an investment

Home / Blog / It’s time to approach SEO as an investment

My wife and I arrived through the end of the tunnel at about 6,000 feet, having just hiked down about 650 stairs on the highest peak on Madeira. Madeira is a semi-autonomous island owned by Portugal and located about 300 miles off the coast of Africa.

We were there on our babymoon, with my wife 7 months pregnant, and decided to go hiking as we are oriented to do. 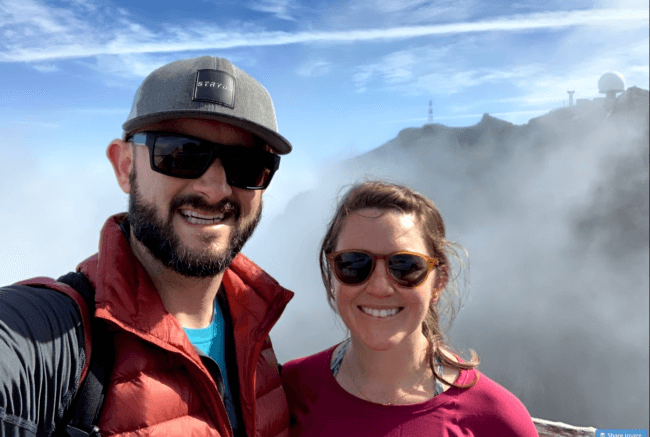 To get there we drove up an impossibly skinny road through horrible weather, rainy and dreary and cold. But then we popped through the clouds and started the hike above the clouds: 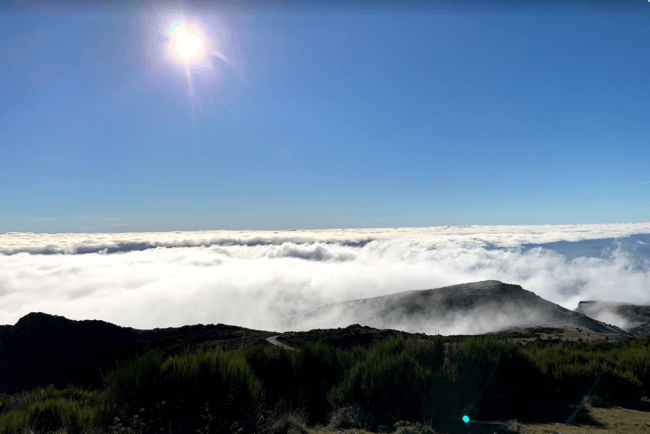 We descended and hit that point of decision. We were in the clouds, it was cold and rainy and windy, and we tried to decide if we should continue. Here’s how steep it was: 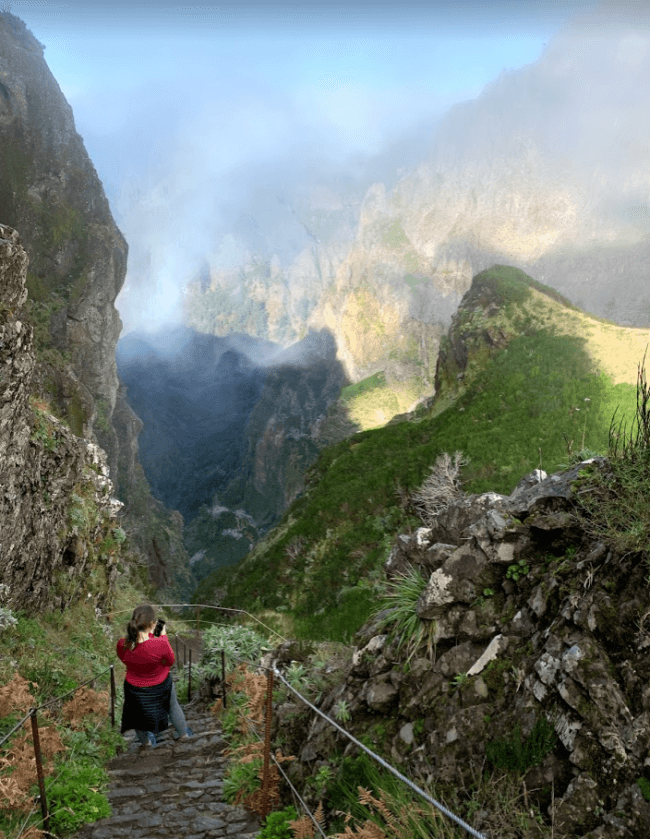 But we decided to keep going, and by doing that we had amazing views like this: 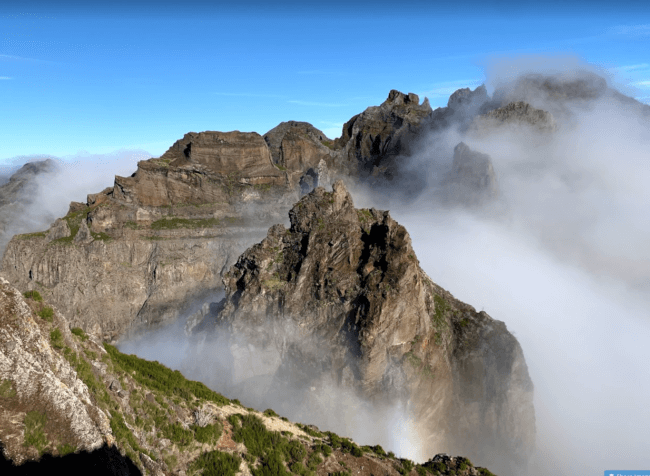 We didn’t give up, but almost did. We stood there, looked at each other, and said “let’s go a bit farther and see if it clears up.”

And as you can see from the above photos, it sure did. It turned into a gorgeous day: 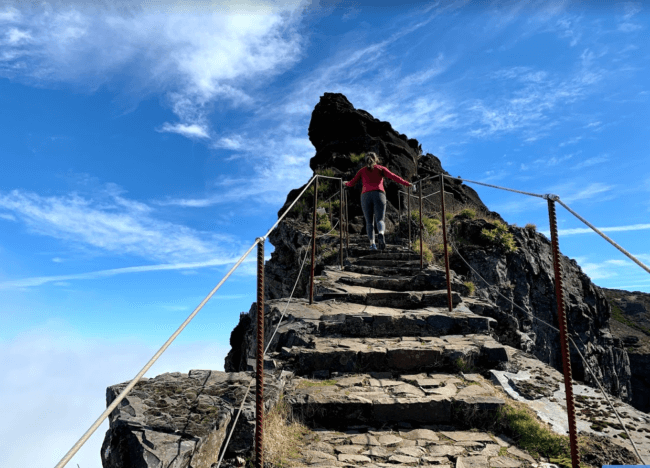 And I think that’s a lesson that many of us, myself included, need to take to heart:

Too many people give up things way too fast when the going is hard and payoff is doubted.

How about these realities:

We have to start learning the habits and process people went through to see a huge month or year or business.

And we have to stop listen to the “make money online” gurus who specialize in something different every 7-9 months.

If we want to succeed, we have to stop giving up after a few months, and need to start thinking in longer timeframes. Three months isn’t enough time to “see traction” on a new channel.

We have to, like we did on that levada in Madeira, keep going a bit further and measure our progress.

But if we hadn’t even gone that far, down the hundreds of stairs and through the tunnel requiring flashlights, we wouldn’t have the choice.

So how do we change from thinking about things from an expense mindset, and instead approach them from an investment mindset?

We’ve been conditioned by society for immediate payoff

First we need to recognize that we have been conditioned by our society to seek the instantaneous. Want a cheeseburger? Bam there’s a fast food joint. New computer? Amazon Prime same day delivery, baby. Want to connect with someone halfway across the world? Heyo, log into Twitter.

While I LOVE many of our modern conveniences made possible by technological advances, I can’t say that I always think they’re healthy for us. Or at least, what they teach us doesn’t always serve us.

We are pushing against what society and even our beloved technology is teaching us. It’s going to be hard.

Embrace and seek strategies, not tactics

Second we have to start with strategies, not tactics. No more 5 ways to do X diet food content.

That stuff never really moved the needle for anyone.

I recently listened to an episode of Chase Jarvis’s CreativeLive podcast that replayed a keynote he and a friend gave at Seattle Interactive in Seattle about creative businesses. The whole thing is worth a listen, but at minute 50 a woman asks:

What are some of your tricks for staying connected to the humanity of our work while spending a lot of time behind our computers creating?

The part about staying connected isn’t important, but the “tricks” part is. Chase says this from the stage starting at 52:53, at which I point I laughed out loud on the plane because I agree so much:

“You phrased your question…as ‘what are some tricks?’. There’s actually aren’t any tricks. It’s about ruthless discipline and the focus part is wildly misunderstood. When you are focused on doing a thing and the outcome is great, the outcome is celebrated. No one sees all the other stuff, and I believe that my best work has always come through focus. The reality is that people are so busy that what they just see as hit-after-hit-after hit, but you’re actually eating shit all the time….”

He goes on to reference Scott Belsky’s (Chief Design Officer at Adobe) book The Messy Middle (Amazon link), where Scott talks about how the middle of products is super hard. You eat a lot of shit in that stage.

How to invest in and structure SEO for the long term

For any marketing channel, you have to start with a benchmark. What is your current traffic/ROAS/revenue/whatever metric matters to your channel?

Notice that we are not starting with what you want your improvement to be, or your ROI to be on a project. There’s no way to know that yet, so don’t worry about it yet.

For an SEO project, start with a keyword research and competitor audit project to understand your opportunity and what your market/potential customers need.

Then, conduct a technical audit to understand the technical things that are holding you back. There won’t be any smoking guns or silver bullets, but you’ll understand what all needs to be done.

Then, put together the strategy to target the keywords for which you want to rank, whether that is new pages, content, links, or likely a combination of all three of the above.

Then, prioritize the changes and determine who will be responsible for each. This will likely require staffing up or bringing in partners to implement. If outside partners are required to make technical fixes or write content, then they will almost definitely be different from the company that did the strategy and audits.

After that, it’s a matter of execution. Waterfall, sprints, however you want to do it. Get it done.

Execute like mad, measure as you go, and keep working at it. It’s called “optimization” for a reason.

This execution is where your results will come from.

Marginal gains as a goal

There was a cycling coach who took over the British cycling team after that team had a long drought of winning. More accurately, they hadn’t never won a Tour de France title in the 110 years of the race’s history.

This coach was different from the others though.

Note, I learned about this example from James Clear’s Atomic Habits, which I HIGHLY recommend.

He believed in marginal gains. In fact, he believed that the best way to ultimately win was through constant improvement, and for him that was 1% wherever they could find it. They improved uniforms, sleep, diet, bikes, travel schedules. Wherever they could optimize, they did.

And they started to win. In fact, within five years of this coach taking over they won 5 out of 6 Tour de Frances races. AFTER NEVER WINNING ONE IN 115 YEARS OF THE TOUR’S EXISTENCE.

Imagine if they had fired that coach for someone cheaper a year in. Or 6 months in because they weren’t seeing the results.

So what about you? Are you convinced yet that just giving something a quick try and then cutting spend if you don’t see a return quickly isn’t the way to go?

I hope so. For your sake, I really do.

How to make whitelabeled services work

Posted by John Doherty on February 25, 2021 in Business/Hiring a marketing provider/Pro Blog

Why you need processes for your business (especially sales)

Posted by John Doherty on February 23, 2021 in Agency growth/CredoCast/Pro Blog/Sales

When I come across service businesses, especially agencies, that are struggling to grow it’s usually because processes are not in place to allow them to…

Posted by John Doherty on February 17, 2021 in Announcements

The bi-annual Credo Digital Marketing Pricing Survey is now live! The survey is open from February 17th-28th 2021. We aim to publish the results in…