The five elements of a successful services proposal

Home / Blog / The five elements of a successful services proposal 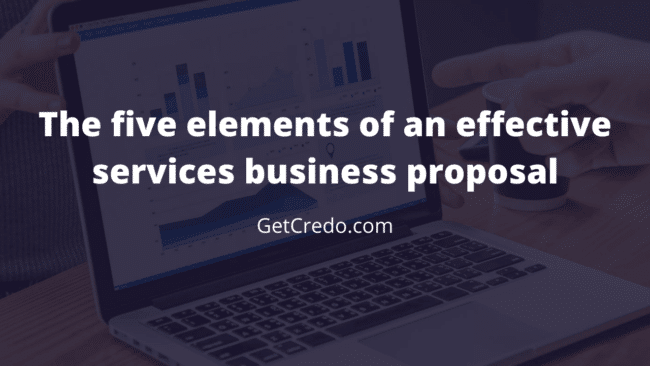 I was once working with a marketing consultant who was offering high-end SEO audits. This person is extremely accomplished, but they were struggling to close high-ticket audits.

They’d close them from time to time, but they felt like they had hit a ceiling for how much they could charge. At the time I was offering 1:1 consulting with agencies and consultants, and they signed on for a few sessions.

Part of this coaching was me asking them to send me one of their recent proposals. When I received it, it was obvious to me why they had a hit a ceiling with what they could charge and their close rates were hit or miss with larger audits for larger brands.

Instead of talking about the specific issues with their proposal, I want to show you the five elements every business proposal needs to have in order to be successful.

Elements of an effective services proposal

The five elements that an effective services proposal (eg, one that gives you the best chance at winning the work) are:

After I cover each of the above and the elements needed, I’ll also cover two common questions I get:

If you are struggling with your sales process and not closing enough work, I’d love to do a Lead Gen and Sales Strategy Call with you. Let’s get your business back on track.

When I was in university studying technical writing, I was taught that every business document needs to have an executive summary.

Because often the person giving final sign-off is not the person with whom you’ve been discussing the project. The executive summary serves to help the busy executive quickly understand

An executive summary should be no longer than two paragraphs. It’s a summary, not a the full context.

If you’re doing your sales process effectively, the point of contact with whom you’ve been discussing the project will have kept the executive/final decision maker up to speed and thus this executive summary is just a formality for them to read and feel good about signing off.

Background and issues your services solve for the prospect

The next section should be some background on when the prospect approached you and the problems they are looking to solve through your solution.

This section is entirely focused on the prospect, their business, and the challenges they are facing.

For example, “When PROSPECT engaged AGENCY in conversation, you had recently experienced a worrying decline in organic traffic which amounted to an XX% decrease in revenue from organic year over year. This is concerning to PROSPECT because of growth goals for the year, and thus fixing organic traffic will play a large part in hitting those goals.”

Then you can go on to talk about the recommended work and why those efforts are recommended.

Next up is your proposed scope of work. This section is very focused on the specific things you will do for the client and why.

It is a bit repetitive from the above, but breaking it out into a separate section will help an executive interested in what will be being done navigate to and understand the scope quickly.

Note that this scope should have already been agreed upon by the agency and the prospect. In my vernacular and the sales process I teach, it is the Scope email where you align on the scope with a micro-commitment of “yes” before even creating the proposal.

Agencies I see struggling to close work tend to skip this step and send a proposed scope of work without truly understanding the prospect’s problems and getting alignment on the scope of the project before sending through a proposal. Similarly, these agencies are also more likely to just do one phone call and send through a proposal as opposed to spending more time with the prospect to understand needs before sending it through.

This is the section that I most commonly see being left out, which often leads to a mis-alignment of expectations on how quickly work will be done and when to expect it.

It’s fairly common for me to hear at the start of a project that a client “thought AGENCY would get up to speed more quickly”, because the agency did not do a good job of showing the client that usually 2-4 weeks is needed to understand their full campaign setup and make needed changes to then see results a few weeks to a month afterwards.

In my proposals when I was consulting, I would outline the main things to be done over the first three months as well as start and due dates and follow up calls. I also noted that these dates would apply as long as the prospect signed the proposal by a certain date, after which we’d have to re-work the dates based on my availability.

I never had to do this, because prospects were quick to sign.

Finally, there needs to be a section for terms and conditions such as indemnification, needed access, mutual NDA, and the like included as part of the proposal.

Some agencies include this as a separate document so that it is easy for a company to run by their legal department. I have no issue with this and have seen it work well.

Finally, there needs to be a signature section. The proposal shouldn’t give the prospect a chance to ghost you right at the end. Instead, your proposal should also be the contract in order to shorten the cycle.

I have too many times seen an agency send a proposal, the prospect says it looks good, and then the agency takes too long to get a contract in their hands and the project never takes flight.

One trick that I learned through my own experience, and was verified by Proposify in their State of Proposals ebook, was that proposals sent with your signature in place sign at a higher rate than those sent without a signature.

In fact, Proposify found that close rates improved on average by 18% when a signature was included versus when it was not.

Should I send a Powerpoint presentation or a document?

One of the most common questions I get about proposals is if you should create a Powerpoint presentation or if a document like a Google Doc will suffice.

To be completely honest, I have not seen a material difference in close rates depending on which one you send.

While it is true that larger enterprises may want a more polished document like a well-designed Powerpoint deck, I still have not seen a material difference in close rates which would lead me to recommend one over the other.

I have seen agencies struggle to close $1,500/mo retainers with a Powerpoint, and I have seen five figure audits be closed with a Google Doc.

At the end of the day, successful proposals come down to understanding what problem the prospect is trying to solve, how your services will help them solve that better than anyone else, and what your fees are.

In fact, I most often see close rates go down when an agency spends too much time on their presentation instead of understanding what the prospect truly needs and what will get them to sign a contract.

Do with that what you will.

Should I go over the proposal with the prospect on a call?

The second most common question I get is if you should schedule a call to go over a proposal with your prospect.

My answer to this is that you only need to do it if you have not already achieved alignment with the prospect before sending the proposal. If you follow my process, then it is not necessary as what you proposed will not need additional explanation since the point of contact was already expecting exactly what you sent through.

Sometimes the point of contact’s boss will request a call to answer some questions, in which case you should definitely do that call. But the call should stay focused on the specific questions they have, and if you need to update the proposal to better explain something then that updated proposal should be sent over within the next business day.

The most important thing to an effective sales process is keeping the momentum going, and it’s most common to lose momentum right at the finish line before the proposal is signed.

Don’t let that happen to you.

Posted by John Doherty on October 14, 2021 in Marketing Strategies

Let’s face it, website forms are old and usually pretty terrible. You click through to a site and want to contact them, but they need 16 fields of information plus your firstborn child before they’re speak with you. Chat bots were supposed to solve the issue, but we’ve all used…

What are the most popular podcasting platforms in 2021?

Posted by John Doherty on October 12, 2021 in Business/Marketing Strategies

Recently I saw a tweet from my acquaintance Justin Jackson over at Transistor.fm where he shared a blog post on Transistor written by his daughter (I don’t know her age, but it blows my mind that people I consider peers have kids old enough to write blog posts on company…

Posted by John Doherty on October 11, 2021 in Business

I grew up in a pretty conservative evangelical Calvinist “Christian” church and household. Thus, I learned to look at things in a very binary way. Right/wrong. Black/white. Good/bad. Sin/not sin. Chosen/not chosen. Redeemed/not redeemed. It’s an interesting way to grow up that doesn’t really hold up (IMO) once it comes…