What is the Flywheel Effect and how does it apply to marketing?

Home / Blog / What is the Flywheel Effect and how does it apply to marketing?

Today, I want to talk about the concept of marketing flywheels.

I was recently asked on Twitter if I could sum up a flywheel in a tweet, because I was talking about how in one Friday, my company generated over half a million dollars in lead pipeline:

Oh and the best part? I worked ~30min. Was watching a sick baby.

Power of a flywheel.

This was across eight different projects based off of the marketing budget that they gave us in their initial inquiry.

And so I tweeted this out because I thought, “Holy crap, that’s amazing!” And the great thing is that I had done that, or that happened, while I was home on a Friday with my daughter, who was sick.

So I literally worked 30 minutes that day and that amount of pipeline was generated, which is phenomenal.

And so it’s a flywheel. It’s the marketing flywheel at work, and so I was asked to sum it up in a tweet, and I can’t, so I’m writing a blog post about it.

What is a marketing flywheel?

So what is a marketing flywheel?

The concept actually comes from Jim Collins’ Good to Great, which I first read back in 2011 or 2012. This is how Jim Collins’s site defines it:

The Flywheel effect is a concept developed in the book Good to Great. No matter how dramatic the end result, good-to-great transformations never happen in one fell swoop. In building a great company or social sector enterprise, there is no single defining action, no grand program, no one killer innovation, no solitary lucky break, no miracle moment. Rather, the process resembles relentlessly pushing a giant, heavy flywheel, turn upon turn, building momentum until a point of breakthrough, and beyond. 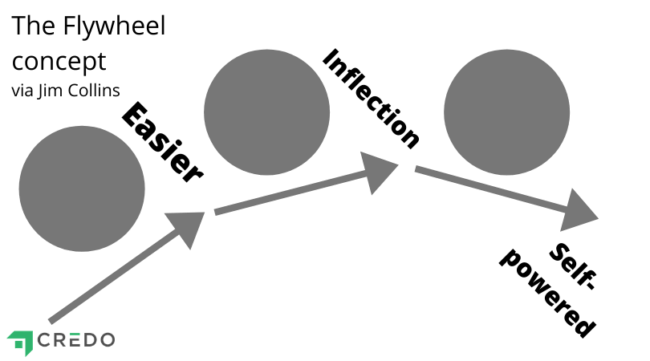 I remember I was reading the book in London, while working for the marketing agency Distilled, because Distilled founder Will Critchlow recommended that we all read it.

A marketing flywheel is when you have built systems that continue to generate business leads, revenue, however you put it, on autopilot, basically, because you’ve architected the systems.

For Credo, our main acquisition channel is definitely SEO, because it’s what I’ve been doing for the last decade.

So how does the flywheel work?

And it always rolls back down, and so you’re never able to finish it.

But a flywheel, on the other hand, it’s like you’re pushing this boulder up to the top, and it’s super hard at first. It’s steep.

But you get further up and it starts getting a little bit easier. So it’s kind of gradually topping out and it’s like, “Oh, this isn’t quite as hard.”

And then gradually, you get to the top and then there’s a tipping point and it’s going. And maybe you’re still pushing it, but it’s just going, and at some point, you’re running to keep up with it.

In marketing, as long as you maintain your rankings or you keep spending  on ads or whatever it is when it comes to marketing, you’re going to keep getting that business.

Of course, there’s triage over time and churn or whatever, and things gradually slide down, but the point is that you’re not actively working on it.

So that’s the concept of a flywheel in marketing.

It applies to business overall as well.

It takes a bit to get going and then it goes and you don’t have to put more into it and it just keeps on producing results.

So there’s the marketing flywheel summed up in a series of metaphors and much longer than a tweet.

We can help. Find the right marketing partner for free with Credo.

How to choose an SEO company

Posted by John Doherty on December 8, 2020 in Hiring/Hiring a marketing provider

Why you (probably) shouldn’t pay your agency by the hour

Posted by John Doherty on November 30, 2020 in Hiring/Hiring a marketing provider

If I had a dollar for every time I talked to a business looking for a by-the-hour engagement with a top-level consultant or agency, I’d…

Posted by John Doherty on November 18, 2020 in Announcements

Over the last five years at Credo we’ve put a LOT of time, energy, and money into growing the company and increasing the impact that…