Home / Blog / What is growth marketing and does your business need it?

This post is for you marketing leaders and entrepreneurs out there.

Today we’re going to talk about what growth marketing is and if your business needs it.

I lived in San Francisco for three years working in tech, and at that time the term “growth” was just starting to really become a thing. There was the term “growth hacker” which was popularized in this post from Andrew Chen of Andreesen Horowitz titled “Growth Hacker is the new VP of Marketing.”

While I took exception to that post and ultimately think it caused some issues in broader digital marketing by communicating hacks over real strategy, Andrew was right on that Growth (capitalized) was going to become a thing.

In fact my title that I negotiated for in 2015 when I moved to Trulia Rentals from HotPads.com was “Senior Growth Marketing Manager” because I wanted to set myself up to be seen as a “growth” person, not necessarily a marketing person.

There are a lot misconceptions out there about what growth marketing is, so today I want to clarify it and if your company even needs it.

The difference between “growth” and “marketing”

In some circles, especially the Silicon Valley tech world, “growth” is thrown around as a commonly accepted term. But I’ve learned that outside of that bubble (and maybe New York City tech), the term “growth” is not a commonly understood term.

In my world, “growth” and “marketing” are two different things. When I worked at Zillow, I was able to see firsthand what a growth team looks like in practice at a large organization. Zillow of course had a large Marketing team full of public relations, content, social media, brand, and more.

But there was also a Growth team that was separate from the Marketing team. This growth team was comprised of developers, designers, and product people who worked on more technical parts of the business to grow audience. They also served as sort of an internal services team for marketing and other teams who needed landing pages for various campaigns.

Growth did not report to marketing. They were their own entity within the company tasked with the above things.

In my definition, the delineation between marketing and growth is that Marketing does the more traditional parts of both offline and online marketing, including social media and content.

Growth handles more technical things that in more traditional companies may fall to a development team or an outside development partner because product engineering teams don’t want to work on them. 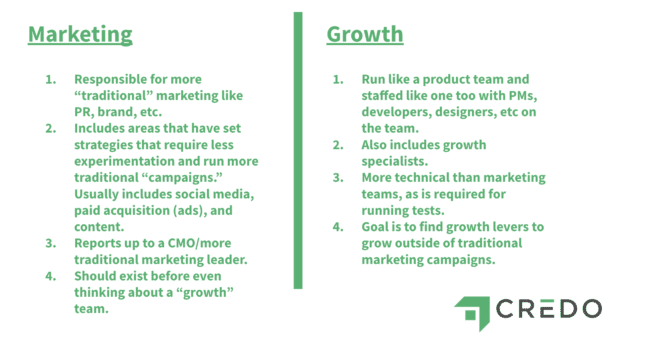 At Zillow, as far as I remember, the growth team was essentially a self-managed product team, which means that the engineers and designers and all the other team members didn’t actually sit in the broader engineering or design or whatever departments.

There is also a middle ground where you have a growth leader and a few growth marketers like SEOs on the team, but the people required to get the work done (engineering/design) technically are within those orgs but are assigned to work with the growth team on growth initiatives. This is how it worked on the marketing-cum-growth team at HotPads when I worked there. My team had marketers on it (SEO, content, PR, email) but we also had 4 engineers who were managed by the core engineering team but worked with my team exclusively. This model can work as well.

Who comprises a growth team

At its core, a growth team is really a product team. If you’ve worked at a large-ish company then you may know the typical roles.

A growth team usually has the following:

Here’s a way to visualize it: 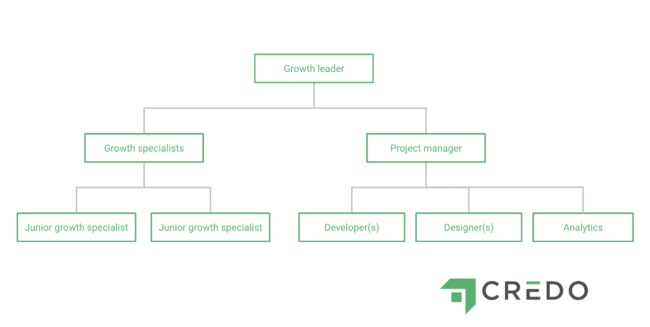 How to make a growth team successful at your company

When you’re committed to a growth team at your company there are a few things to keep in mind so that the team can be successful.

What a growth team is and how to make it successful

To review quickly what we’ve covered, here’s what a growth team is and how to make it successful at your company:

If this was helpful to you, I invite you to follow this link to download our free resource titled “5 questions to ask agencies before hiring.”