Make sure to subscribe on iTunes or Spotify for a new episode every Thursday!

A couple of months ago, I was on an airplane in Portugal getting ready to take off. I wasn’t the pilot but I did have a window seat (rare for me as I usually prefer the aisle).

As I tend to do on planes, I was listening to a podcast and doing some work. I was technically on vacation, but we hadn’t landed in our location yet so I was sneaking in some learning.

I was listening to the Empire Show with Bedros Keuillian and Craig Ballantyne, this episode specifically. As I sometimes I do, the content was so good that I immediately whipped out my phone and started taking notes. Here’s a taste of it: 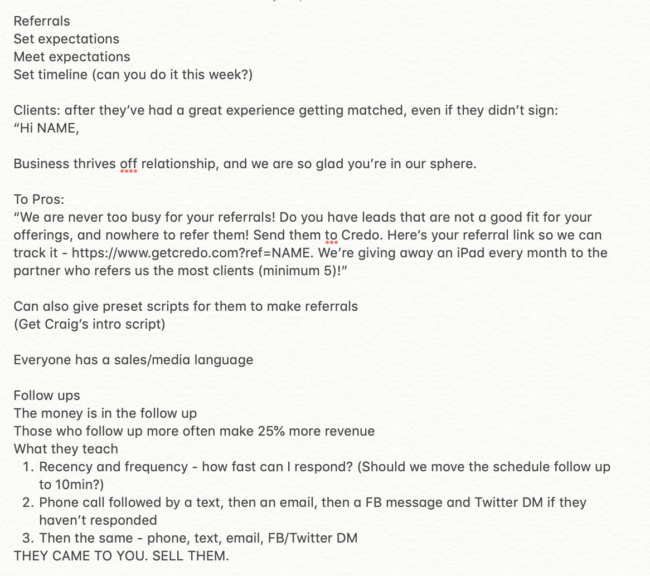 A lot of this is about sales and followups, but there was gold in this episode about when and how to ask your clients for referrals. This can be mapped to asking for testimonials as well.

And this is good and why I want you to listen to that episode, because one of the areas we see marketing agencies and consultants (especially in SEO) fall down on is testimonials and case studies.

Asking for them is awkward. It’s scary. It takes a lot of courage and a desire to tell the stories of those you’ve helped.

Here’s the truth though. If you’ve helped them out in a big way, more often than not they are HAPPY to give you a testimonial/case study and refer people to you.

So, how do you a) ask for testimonials, b) make the most use of them, and c) ask for referrals from current clients?

Note: I recognize that most of you won’t do what I recommend here or will balk at that. Let me challenge you to have an open mind and be courageous in your thinking about these topics.

How to ask for testimonials

You probably already know what a testimonial is, but let’s make sure we are on the same page.

A testimonial is a quote from a client expressing what you did for them and the value they got from it.

Here is a testimonial we have on Credo: 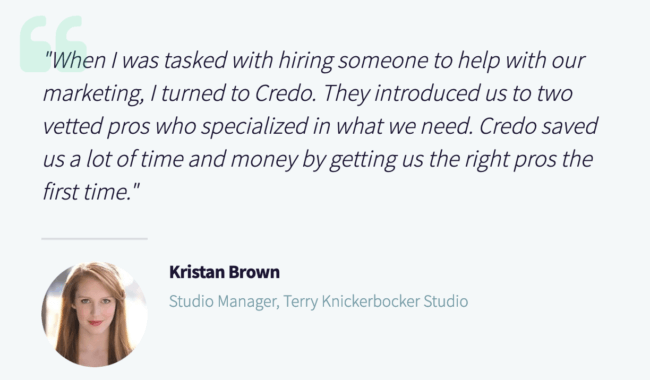 Compare that with this recommendation of Credo from Rand Fishkin (Moz/Sparktoro founder):

Now, I asked for both. But how I asked and when I asked was key.

The rules for asking for these (and being successful at getting them) are simple:

Remembering that a testimonial is from a customer, you need to be careful about when and how you ask for these.

The best time to ask a customer for a testimonial or a case study is when they are likely to be the happiest, which is usually right after you solve their biggest problem.

Here is the email I sent to Kristan:

Notice what I did here (and forgot to do!):

She said she wouldn’t have time to do it for a bit, which usually means it won’t get done unless you step in.

Here’s how the ask went right after:

Notice what I did now?

Remember that recommendations are not from customers, but rather from people in the industry that you know and trust, and others know and trust as well. These lend credence to what you are doing.

For Rand’s recommendation, I emailed him after he mentioned us in this Whiteboard Friday about choosing an SEO company. In that video he said this:

I asked Rand this: 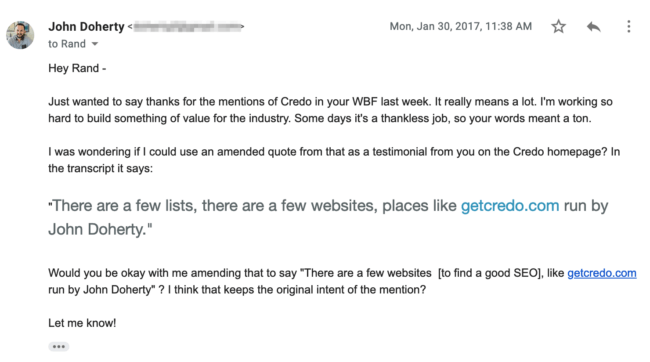 And Rand, being the absolute mensch that he is, came back with this literally 21 minutes later (I’ve known Rand since 2011):

Here’s what you need to know about this:

The three things happening here are:

Basically, I made it easy for him to say yes or riff on it.

Do you get those bad link building emails like I do asking for something on a post from 2011? If not then you’re lucky, but if you do then I want you to ask yourself how often you respond to those.

Probably not very often. I actually implemented a rule of not adding links to posts after I publish them unless I mentioned a brand and forgot to link to them (rare, but happens). If they reach out, I’ll link. But I won’t add in links to “other resources I might be interested in”.

So that worked for that testimonial, but here’s another one I got via cold outreach (albeit, to a friend):

This one is very similar to the outreach to Rand, though I didn’t have an explicit reason (like a recent blog post mention). Instead I referenced something they do (often refer people our way) and offered again to write up a draft for them to approve.

In this case, they didn’t even take me up on that. Instead, they wrote exactly what I needed them to write and I just copy and pasted that to the site.

Why offer to write testimonials/recommendations for them?

Some people have asked me why I write the testimonial/recommendation copy for them instead of asking for it. What I often here is:

“Won’t it be more authentic if they do it themselves?”

While the answer to that is probably “yes”, the question skirts the reality that:

In reality, they are doing you a favor so the best thing you can do is not create more work for them!

There are two reasons I write these for people:

We already covered the effort/work one above, so let’s talk about the pain points.

Your business will succeed and fail to the extent that it solves your customer’s main problems.

If you don’t solve real problems, your business will not succeed. If you’re selling a commodity, you will have a much harder time succeeding than if you are selling a true solution to a problem.

“SEO services” is a commodity. I can go get “SEO services” overseas for $99/month from that guy who emailed me about it this morning. This is a race to the bottom.

“Ecommerce SEO” can even be a commodity, though it is a more niche commodity and thus you can charge more money than generic “SEO services”.

But what about “ecommerce revenue growth”? What about “increase traffic to grow your business”?

In these cases you are selling a solution to problems, specifically:

Once you’ve identified your customer’s main pain points (I like to identify these through surveys, specifically the one in the pre-prelaunch of Jeff Walker’s Perfect Launch Formula as outlined in his book Launch (aff link)), you can now use testimonials on your site to message from real customers how you helped them solve that problem.

Your customers may or may not know the problem you just solved for them. But you should know it.

Now, when you solve a major problem for a customer and it’s not one you currently have a testimonial for (or need another one for), you can ask them for a testimonial and, if you write it for them and ask them for their approval/edits, you can write that testimonial so that it speaks directly to the pain you just solved with your solution to that pain.

Recap: How and when to ask for testimonials and recommendations

So to recap, testimonials (and case studies) should map directly to the solution you have to your potential customer’s problem/pain and how you solved it for someone just like them.

Recommendations are from well known and respected people/publications in your industry. They’re basically social proof.

If you want to ask for testimonials from your customers, these are the rules to follow.

First, make the ask when they are happiest, right after you solved their problem.

Second, make it as easy on them by offering to write it for them.

Third, do it quickly while it is still top of mind for them to approve and so that you do not forget about it;

Fourth, write the testimonial so that it maps to the pain you just solved for the customer.

I hope this was helpful!

One of my favorite hobbies is skiing. My wife and I love it so much we’ve made it a priority in our lives, and our…

What to do when everything feels busy

Posted by John Doherty on March 2, 2021 in CredoCast/Entrepreneurship

I’ve recently reached a place where everything feels super busy. Even though we’re still in a pandemic and I’m not traveling like I used to…

How much of your revenue should you invest in marketing?